Graphics Design Tools are an indelible and important resource for any web, photo or graphics designer.

Although you get lot of tools which can help you in photo editing, illustration, desk top publishing or web designing; however, it is a frustrating experience to use separate software or tools for each of your designing tasks.

What you want is a powerful and all-round tool that can efficiently handle most of your designing tasks including vector illustration, photo editing, web design, DTP and so can save up your time and effort.

One such powerful, all-in-one design and graphics tool that offers varied design possibilities in one compact tool and comes in the form of Xara Designer Pro.

You will find the tool thoroughly handy and easy-to-use. 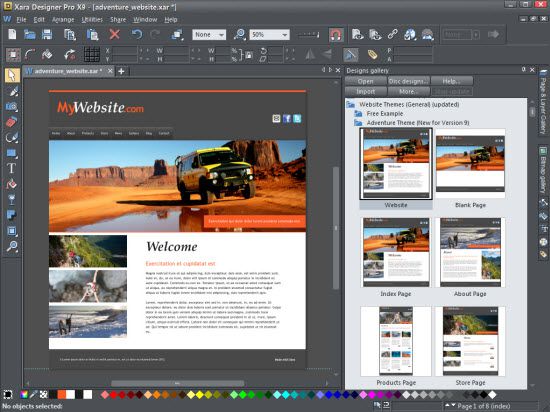 Xara Designer Pro comes loaded with extraordinary powerful graphics engine. Using its powerful graphics engine you can easily handle object-based drawing control and can have pixel-based creativity within its multi-page environment and that too in real-time. The tool provides you enhanced bitmap power for your graphic creations, together with excellent JPEG processing and efficient tools for working with photo heavy compositions.

If you are thinking that Xara Designer Pro will only allow you to create circles and squares in your graphic designs then you will be pleased to know that its drawing tools will also enable you to draw freehand, create a 3D version, edit shapes, and even blend from one shape to another. The program even allows you to add special effects to shapes and graphical forms. Xara Designer Pro has been empowered with lots of powerful functionalities, which make it a thoroughly useful and efficient graphic designing tool.

For example, Xara Designer Pro supports Photoshop Plugins. It also supports a panorama editor and even includes a vector tracer through which the bitmaps can be converted into editable vector images. You get the WYSIWYG web designer through which you can create beautiful flash animations.

Moreover, Xara Designer Pro comes with superb standards support feature which makes it possible for you to import PSD and RAW files, export PDFs, and even provide CMYK color separations, as well. That’s not all as you also get to have the Photo Region and Masking Tools through which you can easily markup imported bitmap areas for editing purposes. The tool is thoroughly intuitive and easily accessible.

If you are working on photographic compositions, Xara Designer Pro allows you to create sophisticated cutouts within XDP using its Erase Background Command functionality. This feature allows you to keep the areas of a photo which you want and can get rid of those which you want to lose. So, you can easily cut complex objects from a photo and can paste them at some other area. Further, using its Photo tool you can enhance the brightness, change the hue, manipulate levels, and remove blemishes and spots of your photographic composition.

Some of the other notable features of Xara Designer Pro that are worth mentioning include its integration with Google Web Fonts, support for Retina screen compatibility. It is even compatible with CSS3 and HTML5. You get to have object re-coloring, provide efficient background handling, and can even get through the navigation bar management and publishing.

Its widget feature gives you a handy table option which makes it possible for you to include sortable tables, which have been based on CSV files. You can easily create flowing text areas, have Word DOCX file import/export filters, include page numbers, and can have even included page and column breaks. And that’s not all as Xara Designer Pro comes with web and print themes, logo designs, backgrounds, and much more.

All-in-all, Xara Designer Pro is an integrated solution for your entire graphic and web design needs. Using Xara Design Pro you can efficiently handle graphics and web designing tasks such as photo editing, web designing, vector illustration, and also as a desktop publishing tool. The program gives the creative power in your hand through its single and integrated user interface.

Although the beginners may find the interface little bit complex to handle and maneuver, however, for professionals it is a graphic design tool par excellence. Using it, you can easily create a web page from scratch and post it online. It has impressive web publishing capabilities together with superb 3D technology, as well. Although Xara Designer Pro provides users with tutorial texts and video sets so as to make them familiar with its features and usage, still it would have been better if it had provided live chat support or even a technical support phone number.

On the whole, after seeing its pros and cons, the verdict is overwhelmingly in favor of Xara Designer Pro. It is excellent, efficient and powerful graphic designing software which provides varied and rich possibilities of designing in the form of a compact program.