RocketTheme has been a forerunner in the development of unique, stylish and feature-rich phpBB3 Styles.

If you are looking for a professional forum design styles, then RocketTheme comes as one of the best places where you are bound to get some of the best phpBB3 Styles in the world.

RocketTheme phpBB3 Styles have been designed to match each and every of your requirements.

You stay one step ahead of your competition with RocketTheme phpBB3 Styles.

RocketTheme has been successful in delivering great and professional phpBB3 Styles. Some of its best known phpBB3 Styles include Oculus, Stratos, Praxis, Kirigami, Graffito, Metropolis, and many others.

Corvus phpBB3 Style from RocketTheme is awesome in design and layout and has been empowered with many splendid features.
Corvus is basically a content centric phpBB3 Style. It uses rich media and text blocks. One of the main highlight of Corvus comes in the form of its detailed design elements which greatly augments its layout and overall look and feel.

Corvus has been built on the RokBB Framework and comes as a fully responsive phpBB3 Style. It is compatible with various digital devices and adapts itself according to the screen sizes and screen resolution of desktops, laptops, smartphones, and tablets. Corvus supports 8 Preset Styles together with numerous structural module suffixes. Corvus does not use any images. Rather it supports WebFont based Imageset and Icons. So you do not have to install matching language imagesets instead Corvus uses pictographic language. It is easily configurable too. 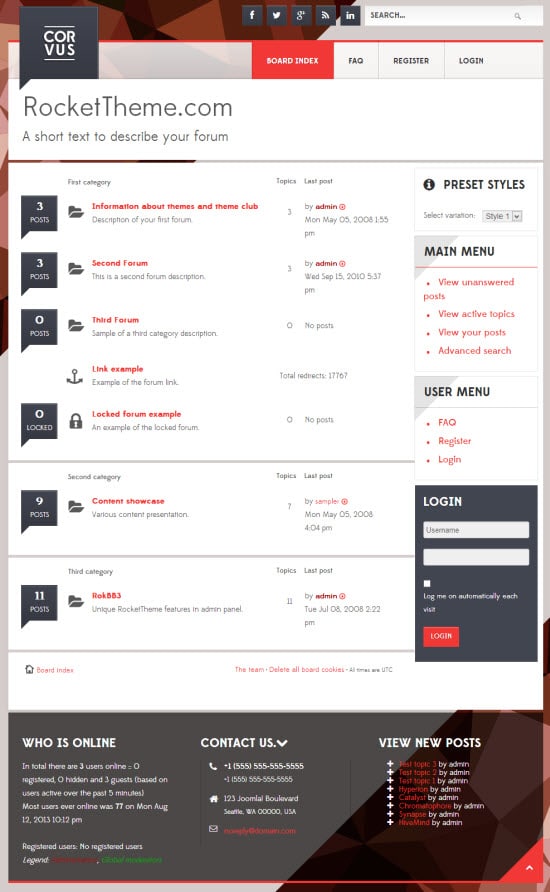 Let’s have a look at the main features of Corvus phpBB3 Style from RocketTheme: